Fr Patrick J Carroll, CSC, was born in the Craggs in the townland of Loughane, in August 1875. He received his primary education in Cappagh NS, under James Burke. He went to the USA in 1896 and was ordained a priest in 1902. A brilliant scholar, he distinguished himself by becoming vice-president of Notre Dame University. He was editor at the Notre Dame press for many years. He died in 1959.

He was the author of many books, the most notable being Round about home, Patch, Patch of Askeaton Days, Patch scatters culture, Michaeleen, The Bog and The Mastery of Tess. He also wrote poetry and plays and a biography called The Man God ‘a life of Christ’.

In his book Michaeleen there is a reference to the Cappagh fife and drum band which was disbanded around Christmas 1860 or ’61. In Patch, ‘Memories of an Irish Lad’,  he recalls going to a concert at Cappagh school at Christmas time 1890 or ’91. He was reciting ‘Who fears to speak of ninety-eight’ when he forgot his lines. He ran off the stage and went home across the fields by Ballymorrisheen. When he reached home, he entered the house by the bedroom window and went straight to bed, such was his embarrassment. His mother heard him, however, and she gave him bread and jam. That was his favourite food.

The ‘Mastery of Tess’

tells the story of Tess Kennedy. She gave her shawl to Charles Steward Parnell at Ardagh railway station. Parnell was on his way to Limerick. He was greeted by large crowds at Rathkeale, Ballingrane and Adare stations. The year was 1891. 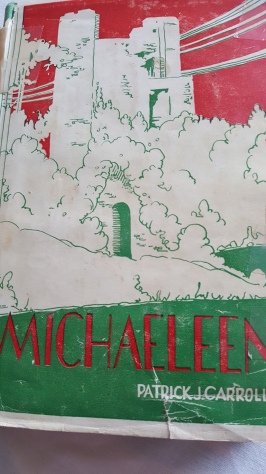